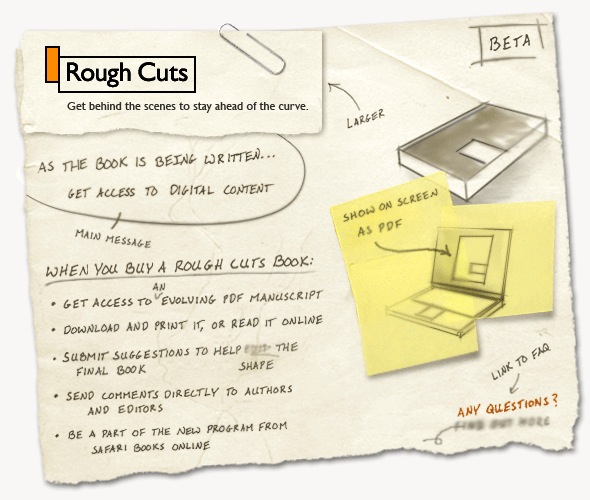 Remember the good old days of e-learning development when your courseware would remain fresh and current for at least six months, maybe longer? It seemed even compliance courseware only needed updates a couple times a year.

Not so much anymore. Content complexity, dynamic industry regulations and an increasing need for user input has made courseware design more, not less, challenging than it used to be. Or should I say, more challenging using traditional development models.

Assuming e-learning courseware is your primary training product, what would it look like to offer an alternative, rapid course model based on O’reilly Rough Cuts?

Have you seen these? They’ve been out now for a couple years. From a recent search on both oreilly.com and peachpit.com, it appears they’re gaining momentum.

What are they? Rough Cuts are essentially book unpublished drafts that you can purchase (yes, real money) to access the books while they’re being written. You can even interact with the author to provide feedback and corrections.

Rough Cuts content usually becomes available anywhere from two to six months prior to a book’s publication. It’s updated as the author and technical reviewers progress, so you’ll have access to new versions as they’re created. Chapters won’t necessarily be written and posted in the order in which they’ll appear in the published version. Rough Cuts titles live up to their name – they haven’t been fully edited, subjected to final technical review, or formatted for print. In other words, they’ll be very current, but they won’t be pretty.

You’re getting the content up to six months prior to release! In addition, you’re able to interact and provide feedback to the authors during this process. And this is from the publishing industry who, historically, hasn’t been the most amenable to digital publishing.

And if you think Rough Cuts are the lighter, “fluffier” titles, think again. They’re covering it all:

True, you could argue this is just another business model designed to “rapidly” separate readers from their money, but the e-learning 2.0 in me sees this as a creative way to get “something” in front of my learners quickly, while enabling a greater number of learners to participate, and contribute, in the course design process. For this to work, there has to be an element of trust between consumer and publisher.

O’reilly obviously trusts its consumers to understand the tradeoffs of having access to unfinished products. O’reilly clearly states what it is you’re buying in Rough Cuts and trusts consumers to use the information with the understanding the content hasn’t been finalized.

Combined with input from actual readers, this model has to make the product that much better. The larger question is how many corporate training departments could trust their learners to buy into such a model? Would they throw out words like “risk” and “liability” before trying to understand how such a model could be applied? How could you initiate a grassroots initiative with individual lines of business?

Still an Enterprise, Not a Democracy

This will no doubt be scary for some organizations. To be clear, this model does not mean the process has to be democratized to the point that no clear owner exists. Your SMEs, legal and business owners still own the final, published version. What you’re offering learners is more immediate access to content while capturing learner feedback during your normal course development cycle. Your audience is now participating in part of that design.

I’d be interested to see, either from O’reilly or its authors, how the model (+/-) impacted development times, quality and errata.

The Need for Alternative Development Models

Rough Cuts clearly aren’t for all readers and neither is a similar courseware model. They’re designed for those long tail readers/learners who have a sincere, professional and passionate interest in having immediate access to content today, rather than tomorrow.

Thinking about your organization, its lines of business and the types of e-learning you currently create, could such a model be incorporated into your e-learning offerings?

Who would you need to work with to initiate such a model? Which groups and types of training content would be best suited for such a model?

Predictions for training departments in 2009 are anything but optimistic. Check out a recent Jay Cross post on the state of the industry and forthcoming “cataclysm”. Clive Shepherd also comments on our industry and offers now is the time for change and taking action.

If you’ve been trying to advocate for more e-learning 2.0 and informal learning, this could be the opportunity you’ve been looking for.